Dr. Paul Nassif has been well-known and recognized for his work in plastic surgery for over 20 years, especially as a rhinoplasty expert. Most patients sometimes wait weeks or even years to have the opportunity to get a new nose from him. One such patient finally got her chance on the July 20th episode of “Botched”, E! network’s newest reality medical show. 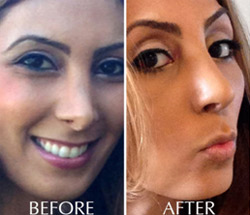 Diana Esho appeared on “Botched” to have revision rhinoplasty performed on her nose. She had gone to a rhinoplasty surgeon ten years ago to fix her obstructed breathing after her sister had rhinoplasty from the same doctor. Her sister’s rhinoplasty had turned out really well. Diana’s surgery, on the other hand, left her with a poorly constructed nasal bridge and a turned up nasal tip, giving her an almost pig-like appearance. The scars from the surgery were jagged and made her nostrils large and uneven. Plus, the recovery was very difficult. Before the surgery, Diana didn’t have any problems with how her nose looked. Ever since, she has only wanted to be photographed from one side.

Diana first became aware of Dr. Nassif and his reputation after seeing him on “Dr. 90210”. She felt certain that he would be the one to fix her nose. Before seeing Dr. Nassif, Diana had spent years researching other surgeons and reading reviews from other patients. She scheduled consultations with many of them but was never satisfied that they could help her in the way that she wanted. Some even suggested that she have other procedures in conjunction with the rhinoplasty, which did nothing for Diana’s self-confidence. Even after years of waiting and hours of research, Diana’s thoughts always returned to Dr. Nassif. Her belief remained firm that he was the answer to her problems.

At her consultation, Dr. Nassif decided that the best course of action would be to use cartilage from Diana’s ear to elongate her nasal bridge and bring down the tip. This would also even out her nostrils and fix her breathing. During the surgery, it also became necessary to perform an alar base reduction to keep her nostrils from being too large. Dr. Nassif had to clear this part of the procedure with Diana’s sister, who said that she and Diana trusted the doctor to do what was best for Diana’s nose. 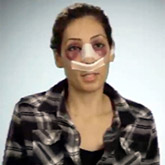 When she came back for her Day 1 check-in, Diana was in great spirits, despite the significant bruising under her eyes. Dr. Nassif said that her positive energy throughout the whole process was going to make her recovery that much easier and commended her for her attitude. He also brought in a technician to help reduce the bruising with laser treatments.

Today, Diana can breathe normally for the first time in her life and calls her new nose “perfect!” Her life has improved dramatically. She can sleep through the night, which gives her more energy and keeps headaches at bay. Her confidence is back and she feels comfortable with how she looks around her family and friends: “This is what I thought I should look like all along.”

Diana is especially thankful that she waited to get her nose fixed by Dr. Nassif.RealSelf interviewed her after surgery to ask about her experience with the world-famous rhinoplasty expert. Compared to the doctor who performed her previous rhinoplasty procedure and the doctors she had seen since, Dr. Nassif was “the first doctor in 10 years that was completely on the same page as me. 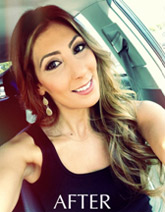 He didn’t want to change my entire appearance; he wanted to help me look like the best version of myself. And that’s exactly what I wanted.” When asked what things were like behind the scenes, Diana said, “[Dr. Nassif] took his time with me and really made sure I was comfortable and confident going into surgery with him. He and Dr. Dubrow were so friendly and caring the entire time — and they definitely kept us laughing hysterically. The witty banter between the two of them is the real deal!”

Catch Dr. Nassif and his friend Dr. Terry Dubrow every Sunday night on E! network at 10 PM ET/PT to watch more amazing life transformations for patients just like you! You can also read Diana’s full post-surgery interview here. If you’re interested in a Rhinoplasty procedure, contact Dr. Nassif today for your consultation.

Get the most from life

Dr. Paul Nassif understands the importance of feeling confident in your appearance. He works with patients to enhance their natural beauty and allow them to get the most out of life. If you are interested in an appointment with Dr. Nassif, contact our office to schedule your consultation.

Schedule a Consultation
Accessibility: If you are vision-impaired or have some other impairment covered by the Americans with Disabilities Act or a similar law, and you wish to discuss potential accommodations related to using this website, please contact our Accessibility Manager at (310) 361-6910.
Contact Us